This # for case studies is great for demonstrating best practices and practical advice. What works and for how much? You can find out here.

What did we want to achieve?

The national networking company 4Networking has a very active business forum online for all it’s members. As a treat they gave Tom Lawrence of TLC Office Supplies an opportunity, a long with a few others, to display an advert for free on the forum. This was a great opportunity as Tom was always pretty well known on the forum. Tom has a great sense of houmour so when it came to thinking up an advert, it had to be something out of the ordinary!

What did we do?
We came up with the idea of teasing the people on the forum to click to see Tom get a pie in his face! When you clicked through you were presented with a video where Tom tells you about his latest offering, but eventually is the victim of a pie to the face. AWESOME.

What was the thought behind it? Why so good?
The clever thing was that people had to sit through Tom’s promotional video right to the end to see the pie shot, and were ultimately left to wander around his website after.

What did it look like/what was it?
This banner was placed on a business forum and clicked through to the video below it;

Here is the link to the video which was placed on a landing page on his website: http://go.shr.lc/1jkj72Z

Was there any other contributing marketing?
He then also put it in his forum signature that appears everytime he makes a post:

What were the results?

Tom’s website saw an increase of around 70 – 90 hits a day just from this ad alone acheiving nearly 600 views in just a few weeks. His shares on his website went from the odd one or two, to 29 + on Facebook and on Twitter spreading his brand further out there. Numerous Tweets about the video were seen… 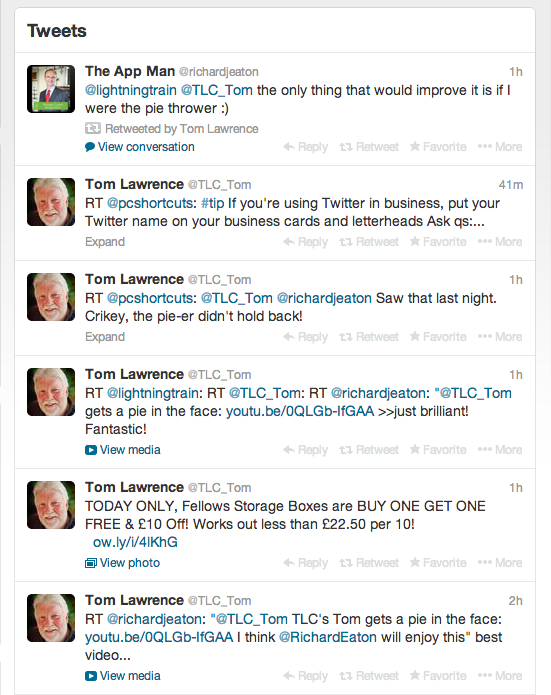 People still talk about it 6 months on and there was even a planned charity event centered around it, building from the hype.

How could we improve it?
The campaign was a massive success, for brand building and generating buzz and awareness. The effectiveness of the ad in relation to getting customers is difficult to measure. Perhaps Google Analytics tracking codes could have been used to measure the customer journey and conversion rates. We could have also taken it further and used it as another advert on YouTube.

Further Comments
Getting a pie to the face isn’t the usual recommended thing, but doing something different is! It is important to not follow the norm when it comes to promotions. 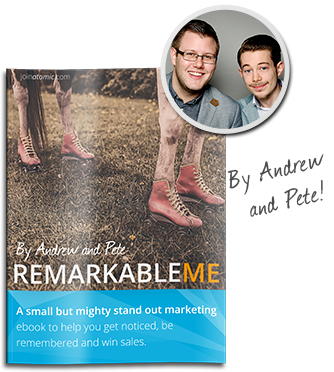 How to ensure your business gets noticed – Free Download

A really successful business isn’t good, isn’t great, isn’t fantastic…it’s REMARKABLE i.e. it gets people to make a remark about it! In this free remarkable ebook, we’ll take you through the steps it takes to make your business remarkable too, so ultimately you’ll get noticed, be remembered and win sales.