This # for case studies is great for demonstrating best practices and practical advice. What works and for how much? You can find out here.

What did we do?
What we could have done was hand out lots of flyers aimlessly and shouted about to people. Instead of spending money and the time to sort flyers out, what we did was quickly and easily set up a Facebook advert campaign that was highly targetted. The advert was to get more like to the page.

What was the thought behind it? Why so good?
The idea is that once we get someone to like the page, then we can start to engage with them. They will see our future posts (not all, but some) and therefore we can form a relationship, and give them knowleldge about our events and why they should come… forever more. This is why social media is so powerful, it allows you to engage on mass with people.

Not only this but the adverts were targetted at our perfect target market. We narrowed it down to; small business owners between 18-27 that lived around the area. Perfect.

What did it look like/what was it?
The advert simply displayed the networking logo with a short description and call to action. Here is a screen shot of the advert and the results, you can get more indepth analytics if you want to delve deeper: 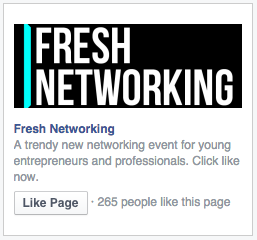 Was there any other contributing marketing?
We did other things to push the group like talking to key influencers and also setting up a Twitter account. The analytics on Facebook however are extremely good, so you can see exactly how many likes you got directly from just the advert. What will have helped is the page was designed nicely, and had interesting content posted every other day.

What were the results?
The results of the advert was a direct increase of 115 likes and post engagement on the page went up because of more people. The likes steadily rose up around 10 per day for two weeks.

As for the event itself, just under ten people came on that first event solely from Facebook who we didn’t know (there was around 17 in total). This was actually a big success in our eyes as it was a small event and quickly put together. As more events have progressed this number has got higher and higher as can be expected. So the foundations are there now to build on and encourage more of those likes to come to an event.

How could we improve it?
We could have tried a more structured approach to A/B split testing, i.e. testing five different adverts with different copy and alternate images to see which worked best. Finding the best performing adverts means that the price you pay to get a ‘like’ will be less.

We could have also used a Facebook power editor extension, to help narrow down down the audience even more specifically to increase its effectiveness and therefore reduce the cost overall per ‘like’.

Further Comments
Getting so many like in such little time and with such ease was great, it was a free event however so not a particularly hard sell.